Sightings of alligator (not this one) spook, amuse Michigan college town as precautions continue

No reptiles are present in this placid view of Whitehouse Nature Center on the Kalamazoo River. (Photo: Facebook)

"The college is working directly with the Michigan Department of Natural Resources and other local agencies to resolve the situation as safely and quickly as possible," a Monday update says.

"While there has been no confirmation of an alligator after multiple searches, Albion College is taking every precaution to ensure the safety of the campus and the surrounding community. As a result, the Whitehouse Nature Center will remain closed until further notice."

This time, Covid isn't why Albion College starts a social media warning with the familiar phrase "out of an abundance of caution." The risk reportedly was from a reptile, not a virus.

Administrators at the small campus in Calhoun County shut riverside trails and a visitor center Sunday, a day after "two independent sightings of what is thought to be a four- to five-foot alligator ... in the Kalamazoo River where it runs through the Nature Center," it posts on Facebook. "For your safety, we ask that you stay away from the areas near the Nature Center and remain vigilant around bodies of water."

A separate warning from the 140-acre Whitehouse Nature Center says: "We urge everyone to stay away from the area while the college works with authorities to locate and remove the alligator."

The unusual alerts about a non-native critter spark over 200 comments, ranging from plausible speculation (a pet reptile got big and was dumped) to mirth and ridicule ("global warming is happening faster"). More samples:

♦ "Albion is missing a golden opportunity to change their mascot to a gator." -- Bryan Frink of Beverly Hills, Mich., Class of '94

♦ "Is this the converse of how some people from the Midwest head to Florida during the winter?" -- David Whitesell, Plymouth

♦ "The investi-gators are working as hard as possible." -- Jacob Lyday, Saginaw 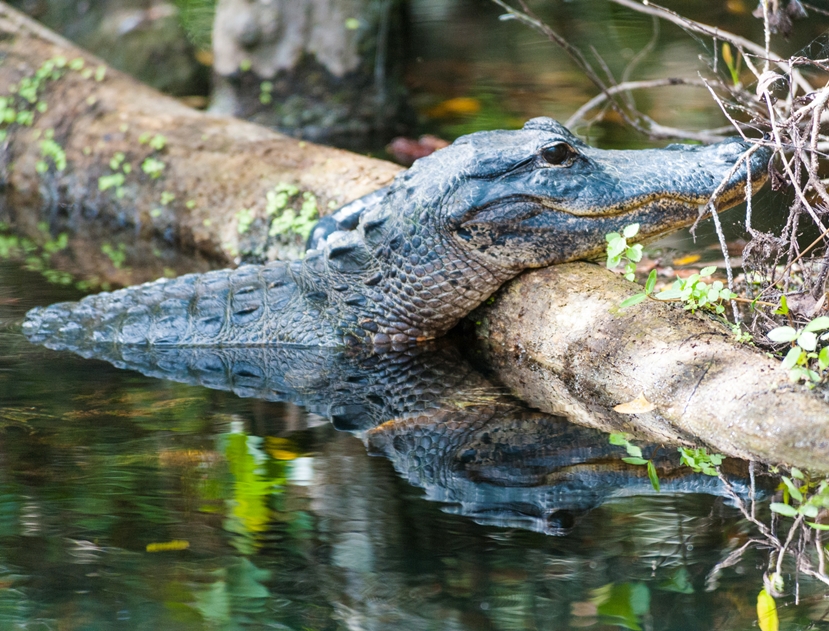 Come out, come out -- wherever you are. (Photo: DepositPhotos)

♦ "The Department of UnNatural Resources  was notified immediately. DUNR from time to time gets reports such as these involving gators, sharks, saucers and Bigfoot." -- Washington Gardner H.S. alumni group, Albion

♦ "There's an academic paper in this, I'm sure! 'A study of the socio-cultural response to vagrant species sightings in a Midwestern small town.'" -- Sherry Burlingame, alumna

♦ "An alligator has shut down my college’s nature center and I have to pinch myself that I'm not hallucinating." -- Jason A. Watts, Class of '99

♦ "Crikey! This is some action packed stuff!" -- Katie Cavanaugh, Kalamazoo

♦ "Reward if I catch it?" -- James Manthei, Albion
♦ "Yeah, new boots and a belt maybe a handbag if it's big enough." -- Veronica Manthei of Rockwood, an alumna