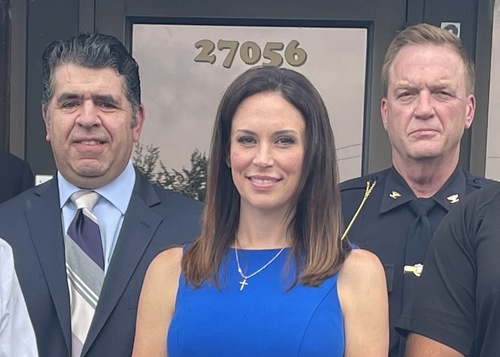 Shelby Township Police Chief Robert Shelide says the media is "evil," the charging of Grand Rapids police officer Christopher Schurr was one of the most "disgusting" things he's ever seen, and that he'd rather have his officers not work than face the prospect of going to jail for "doing their jobs."

The 36-year law enforcement veteran made the comments to GOP gubernatorial frontrunner Tudor Dixon Tuesday during a roundtable talk with suburban police chiefs and state union officials. He's the same chief who was suspended for 30 days in 2020 for tweeting that he wanted to see protestors in New York, who turned violent, in body bags.

Dixon, of Norton Shores near Muskegon, has been endorsed by the Police Officers Association of Michigan and defended Schurr after he shot motorist Patrick Lyoya in the back of the head during an apparent struggle for his taser. Schurr was charged last month with second-degree murder.

The meeting was held the same day a Democrat-backed organization launched an attack ad claiming Dixon's tax-cut plan would slash police funding. The candidate said it would not.

Shelide urged Dixon to maintain her support for law enforcement in the face of mounting public scrutiny and "just totally block the media."

"The media ... they're never going to be your friend as a conservative," the longtime chief said. "They're evil. And you just have to not care what they think or say, with their stupid questions and accusations."

Shelide was one of several officials at the meeting to lament the charges against Schurr and describe feeling besieged by what they view as aggressive prosecutors and a negative public perception.

"This has taken a form that we're malevolent, we have evil intent or we're evil people," said Romulus Police Chief Robert Pfannes. "The character assassination, that causes you to get prosecuted because you can be judged in a way that literally no human could live up to. I can't ask anybody to go out there and be perfect."

After a Romulus officer described "the most dangerous place for me on the job" as "in the administrative hallway" — a reference to the risk of being accused of wrongdoing and criminally charged — Shelide said if he headed that department, he'd "tell my guys to do nothing." Romulus is in Wayne County, where Democratic Prosecutor Kym Worthy has developed a reputation for being tough on problem cops, whereas Shelby Township falls in the jurisdiction of Republican Macomb Prosecutor Pete Lucido, a conservative, who is accused in a federal lawsuit, along with Shelide, of wrongly arresting and prosecuting a Black Lives Matter protestor.

"Why would I want them to risk going to prison when they have their families?" Shelide said. "Now, I'm in an affluent community and our community loves us ... but if I was in one of these communities where I knew that one step away they were going to prison, I'd be whispering in all ears: 'Make your runs, do the bare minimum, collect your check and we’re all gonna go home safely.'"

Support Deadline Detroit journalism. Become a member or give a one-time donation by clicking here.