Derringer: Does the Michigan GOP have a fever that will break? Or long Covid?

This has been a strange primary election season in Michigan, even by the standard of recent years, which have been very strange. Democrats, enjoying the advantages of incumbency, are quiet; Gov. Gretchen Whitmer has no opponents from her own party, and neither do Attorney General Dana Nessel and Secretary of State Jocelyn Benson.

On the Republican side, it’s a different story. For a while, it seemed everyone was running for governor. Ten declared candidates scrambled for the signatures they’d need to make the ballot, and half washed out after the April deadline, including the de facto front runner, former Detroit Police chief James Craig. 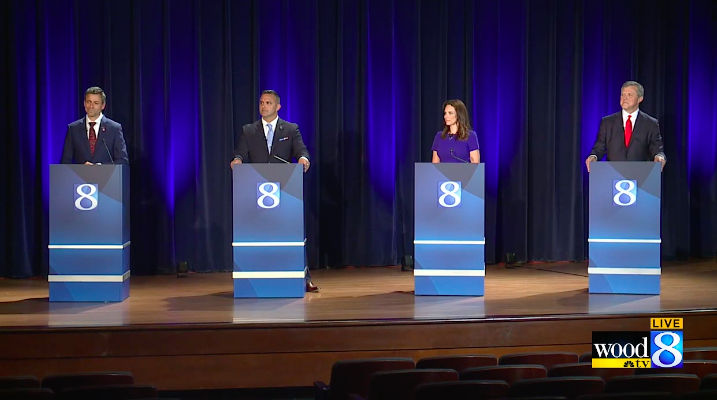 The five who are left are bunched in polls, scrambling to reach a still-large undecided voting bloc of 38 percent, which may be deciding right now, thanks to former President Trump's endorsement of Tudor Dixon.

Talk to people in Michigan about the current state of its Republican Party, and certain themes emerge. One is illness: The GOP has a fever. The GOP is sick. The GOP has gone nuts.

Take David Worthams. He’s a minority among the Michigan GOP today – a Black man who fell out with the Trump wing of his party after the Charlottesville incident in 2017, but who still considers himself a fiscal conservative and social-issues moderate who “leans right” and is excited about rising GOP stars like John James. Still, he said, he considers current party stars “crazies” who will have to be defeated before the party can be whole again.

Today, Worthams serves on the Michigan Civil Rights Commission, appointed by Gov. Gretchen Whitmer. That alone makes him a heretic to some, but the work is important. He finds it astounding that polling done before the GOP field sorted itself out showed Whitmer “underwater with white women 30-55,” but today she’s the odds-on favorite to win re-election in November, in large part because of the extreme positions taken by her would-be opponents.

“If that didn’t create an opportunity for someone to take advantage of, I don’t know what would,” Worthams said.

As a Black Republican, he said, he has sometimes faced racism within his own party, but chose to overlook it because “if we’re a big-tent party, we have to act like it.” Today, he lamented, the tent is growing ever-smaller, with anyone who doesn’t toe the extremist line denounced as a RINO – Republican in Name Only.

'Not ready for prime time'

Vincent Hutchings is a professor of political science at the University of Michigan in Ann Arbor. He said he hasn’t been following the primary closely, in part because “these candidates aren’t ready for prime time.”

“None of them have held any elective office,” he said. “They are literal amateurs, so part of what we’re encountering is that the vetting process that might have led to more qualified individuals has broken down. More sober individuals have not emerged. They are clearly a joke.”

But it’s a joke, Hutchings said, that the GOP base in Michigan – part of it, anyway – is happy to participate in.

“Part of the reason these candidates are doing this is, they are appealing to an audience who is buying what they are selling,” he said. “The chief innovation of Donald Trump in 2016 is, he recognized that on some fundamental level, a large swath of the American public does not care about Democratic norms, and you can violate those norms without fear of reprisal.”

Sometimes the norms are respecting election results. Sometimes it doesn’t matter what you believe:

“The serious-minded people in the Trump administration recognized that he lost, and I think even the non-serious people knew, but didn’t care,” Hutchings said. “(The GOP primary field has) drunk the Kool-aid and what they’re likely to say is, they’re on the side of righteousness and virtue, and they’re sufficiently deluded, and live in such a bubble, and don’t recognize that most people in the state aren’t drinking from the same Kool-aid cup.”

Timmer, the former executive director of the state GOP, calls his former party’s supporters  “knuckle-draggers” who’ve “emerged from the ooze” and are driving the party at high speed toward a cliff, and that’s before the four-letter words start.

Timmer isn’t just in the wilderness, like Worthams. He has joined the enemy camp, co-producing a podcast with former Michigan Democratic Party chair Mark Brewer, and consulting with Nessel on her re-election campaign. Bitterness is all he has left for his former party.

“The five people left (on the primary ballot) nobody knows or gives a shit about. None of them would have been considered credible five years ago,” Timmer said. “You’re left with this field of five who are crazy, extreme and unqualified. Tudor Dixon has grabbed the mantle of the ‘normal’ candidate.” But she’s still peddling the election-fraud narrative, he said, and recently made national headlines for telling LeDuff, in that same interview, that a 14-year-old girl raped by her uncle should be made to carry a pregnancy that might result from it.

There are still serious-minded Republicans in Michigan. They’re mostly staring into their laps, wondering if this will be a brief illness or the political equivalent of long Covid.

Ryan Kelley wants to be the next governor of Michigan, and along with the four other surviving candidates in the GOP primary field, has been doing the rounds of debates, meet-the-candidate forums and the like in hopes of getting the nomination. Here he is in a recent event in Grand Rapids. Asked if he believed the 2020 presidential election was stolen, he replied:

“The answer for me is that yes, the 2020 election in the state of Michigan was fraudulent, and it was stolen from President Trump. …Free and fair elections are the hallmark of our republic. And what we’ve seen with the ‘2000 Mules,’ what we’ve seen with putting the pizza boxes up at the TCF Center windows, and all of the ballot drops early in the morning – all the signs pointing to suspicious activity.”

There are maybe two factual statements in that statement: Free and fair elections are the hallmark of our republic. And Kelley believes the election was stolen.

It was not stolen. There are legitimate explanations for every “suspicious activity,” the “2000 Mules” movie has been debunked by multiple fact-checkers, and Joe Biden received 154,188 more votes than Donald Trump.

“This will be like the tea party, but it’ll take longer to recover from,” he said from his home in Kalamazoo. “Trumpism is a fever. This will be more painful.”